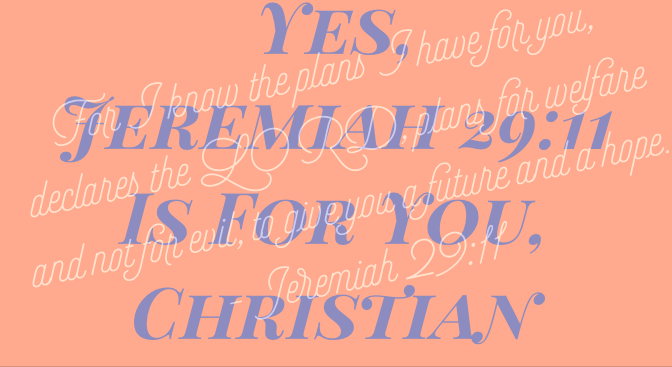 I love life-verses, but only in such a way that describes what one aspires to be or do or perhaps even find hope. I have a life-verse: Proverbs 27:23 – “Know well the condition of your flocks, and give attention to your herds.” This is my life-verse as a pastor. It is that which I aspire to do. I want to make sure I am staying in contact with the flock under my care. That doesn’t mean I am perfect or even great at doing so, but it is what I aspire to do. I want to know how they are doing spiritually, emotionally, and physically.

One life-verse that often gets thrown around is Jeremiah 29:11 – “For I know the plans I have for you, declares the LORD, plans for welfare and not for evil, to give you a future and a hope.” The issue that I have with using Jeremiah 29:11 is that people tend not to understand it in context. Misunderstanding (or not knowing) the context can absolutely lead to misunderstanding the verse itself.  That being said. . .I am not one of those people who say something like, “Jeremiah 29:11 is not for you.” Because of this verse being taken out of context for so long and so often, many have swung the pendulum way to far to the other side, declaring that this verse is not for Gentiles. I can get that mentality if they mean (and only mean) that this was written to exiled Jews in Babylon. But even still, to me that’s like saying, “2 Corinthians 2:17 is not for you; it was written to the Christian church in Corinth.”

Quickly, I want to take you into a better understanding of how you can “claim” Jeremiah 29:11 correctly. As with every verse, one must understand the context. It isn’t hard to get there; it’s explicit in verse 4 of the same chapter. “Thus says the LORD of hosts, the God of Israel, to all the exiles whom I have sent into exile from Jerusalem to Babylon.” Notice three major points in this one verse: a) God is the LORD of hosts (as Chris Tomlin would say, He’s the God of angel armies), thus indicating that God is sovereign and almighty, b) This was written to those in exile, as already stated above. The question is: why are they in exile? That isn’t explicit in this verse. The reason for the exile is that the people had become completely disobedient to God and full of idolatry. The exile was God’s discipline. c) God did this (“I have sent”). This was God’s doing; God’s work; God’s discipline as a loving Father.

In the next few verses, God instructs the people to live life as close to normal as they can. The discipline is harsh, and no one is going to enjoy it, but seek to continue on in life. Get married, have babies, work, play, seek the welfare of those around you in exile (love your neighbor). But he also said not to listen to the false-prophets and diviners. Those people were telling the Jews that they wouldn’t be in exile very long. The truth is, they would be: 70 years (Jeremiah 29:10 – you know the verse right before the famous life-verse).  Having been told that this wasn’t going to be easy, but painful, but to carry on as best they can and to be careful that they ignore ungodly men because this discipline would last 70 years, God reassures them with the words, “For I know the plans I have for you, declares the LORD, plans for your welfare and not for evil, to give you a future and a hope.”

The exile was not to bring evil upon the people, but it was for their good. It was all part of the plan. It is often said that God loves you just the way you are. Yes, He does. But He also loves you too much to leave you in such a condition. His plan to take the Jews in and through the exile were good plans even though they were painful plans. Discipline was necessary in order to make the people into the people they were to be. Ultimately, He paved the way for their Messiah, their ultimate good. Their future good was delivered only through the exile. Their future hope was buried beneath the surface of discipline.

This verse was a verse of assurance so that the people in exile would know that this was not the end, but a portion of a greater plan. This is not the end of the Jews and not the end of God’s love for them. In that way, we can say, “Yes, Jeremiah 29:11 is for you, Christian.” As a believer, there will be times where we get off-track. We will not see our folly or we may ignore the clear warnings that we are in sin. There will be a time where we need to be disciplined, but take heart, that is not the end of the story. God still loves us. He is not abandoning us. He is not leaving us in our suffering. There is a future and a hope, but that comes only by way of discipline. We, therefore, ought not to give up, but keep going.

Jeremiah 29:11 (or perhaps Jeremiah 29:4-11) sounds similar to Hebrews 12:5-13. God disciplines those whom He loves so that we bear fruit of righteousness. Therefore, we accept it (though not enjoy it) and keep moving forward.

And have you forgotten the exhortation that addresses you as sons?

“My son, do not regard lightly the discipline of the Lord,
nor be weary when reproved by him.
For the Lord disciplines the one he loves,
and chastises every son whom he receives.”

It is for discipline that you have to endure. God is treating you as sons. For what son is there whom his father does not discipline? If you are left without discipline, in which all have participated, then you are illegitimate children and not sons. Besides this, we have had earthly fathers who disciplined us and we respected them. Shall we not much more be subject to the Father of spirits and live? For they disciplined us for a short time as it seemed best to them, but he disciplines us for our good, that we may share his holiness. For the moment all discipline seems painful rather than pleasant, but later it yields the peaceful fruit of righteousness to those who have been trained by it.

Therefore lift your drooping hands and strengthen your weak knees, and make straight paths for your feet, so that what is lame may not be put out of joint but rather be healed.

I love Jeremiah 29:11 in its context. I hope you do too. If you are a nay-sayer to Jeremiah 29:11, please let me know why. I’d love to read your comments. If this article was a blessing to you, please share that with me as well, also feel free to pass it on through social media by sharing.

All verses are from the ESV Bible, published by Crossway.